Last Saturday night, we were treated to a special show – a snake show. We took turns holding the (non-venomous) Indian Rat Snake, who was actually quite calm because it was in the middle of shedding its skin. It was incredibly muscular, and you could feel its body contract as it twisted and slithered and found your tree-limb arms. 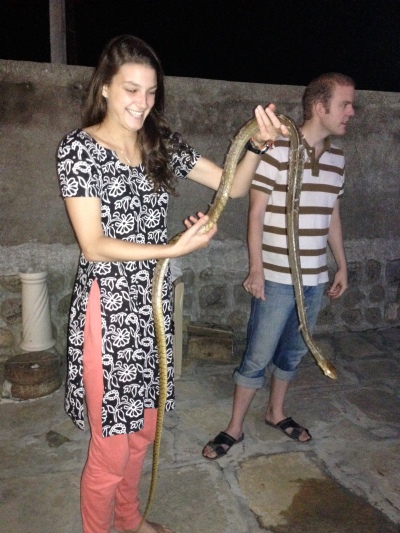 The star of the show, however, was the Indian Cobra that was hissing and agitated even before it was brought out of its box. On the back of its hood, the speckled design mimicked a smiley face – a diversion to confuse predators. Ravi explained to us that cobras are comparatively not the worst snakes to get bitten by: their venom contains neurotoxins that elicit muscular paralysis, leading to respiratory distress, compared to, let’s say, a viper, whose venom contains neurotoxins and cardiotoxins, affecting the lungs and the heart. I feel so much better… 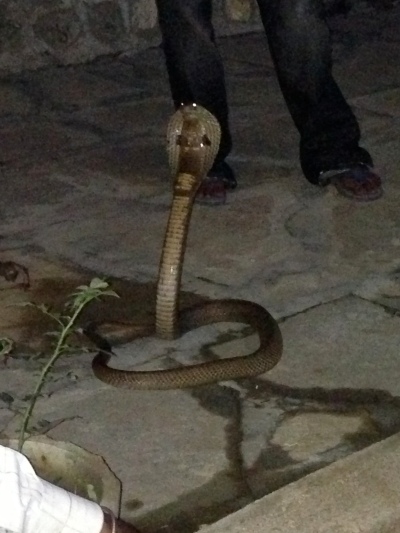 He also told us a story about an Indian government agency that cut availability of snakebite medications in villages. Know what those villagers did? They caught some 150 snakes, took a train ride to Pune, and set them loose in the government office. You can bet that law was changed.

Sunday has been somewhat quieter. I went to Jamkhed church with a couple other international students, and although we didn’t understand much of the Marathi sermon, we did enjoy the upbeat and joyful singing. The children were especially delightful; my parents brought coloring books and Cheerios to keep my siblings and I content during mass, but these kids were happily clapping and singing right along!

Today was also the graduation ceremony for the girls in CRHP’s Adolescent Girls Program (AGP), two hours of song and dance and skits the girls designed to communicate their lessons and appreciation for the program. About 40 girls, aged 12-18, from two project villages enrolled in the 10-week program back in May, and have since come to CRHP’s campus each Sunday for lessons and training. Each session has a new theme: personal health, gender equity, nutrition, leadership, dowry, early marriage, reproductive health, family & child health, domestic violence, rights of adolescent girls, and importance of education are taught with interactive games, role-plays, skits, songs and teachings. They even learn karate, which is more of a self-confidence boost than self-defense instruction, but the girls are really strong!

AGP’s goal is “to promote the present and future well-being of the participating young girls, an impact which will ripple out into the health and well-being of their children and of their wider community, breaking down harmful, deeply entrenched traditions of gender-based injustice”.

It is CRHP’s hope that after participating in the program, these girls will delay early marriage (they are taught to wait until at least 18), value their education (stay in school until at least high school), understand and promote gender equity (refuse dowry and speak out against violence), and gain financial literacy and knowledge through formation of Self-Help Groups.

To paint a picture of the gender inequality in India: girls under 5 are 75% more likely to die than boys. Female literacy is only 65%, while male literacy is 85%. Excuse my generalization, but girls are severely undervalued.