Lesson learned: do not wait a whole month to write about it! A glimpse at the beginning of my 2014…

After  a long ride of trivia games, we returned from out Pune trip around 9pm on New Years Eve; immediately we kicked into cooking mode: Richard and Irene made pasta, Lexi and I made salsa, and Matt got some music going and drinks together. It was comparatively a low-key night, but when the countdown to midnight began, we joined together to say goodbye to 2013 and welcome in the New Year, raising our glasses of white wine sangria. Cheers and hugs were shared among all in our eclectic crew; even Biru was there to celebrate, his infectious smile and laugh initiating a domino effect of joy and gratitude. Though I’ve always thought NYE was incomplete without heels & shiny dresses & champagne, I was perfectly content in my jeans and sweatshirt – all you really need are people who will help you bring in the new year with laughter and love.

Presenting at the Nursing Conference in Sangli

An honor and a privilege, Irene, Lexi and I were invited to speak at the Nursing Conference held at Bharati Vidyapeeth Deemed University in Sangli, about a five hour drive south-southwest of Jamkhed. The theme of the conference was “Changing Demands and Improving Quality Outcomes in Nursing – a Global Perspective”, and we divided the topic among us to speak about the U.S. healthcare system (Irene), the community-based healthcare system the Jamkhed Model promotes (Lexi), and the shifting health demands of the world’s population and how health professionals can meet these needs (Alyssa). Preparing for the conference and our presentation was a little bit stressful – I felt like I was catapulted back to Elon and was preparing a final project on which my entire grade depended – but during a late, delirious night of preparing the night before, we accepted that, in addition to representing CRHP, this would be an incredible learning experience.

We had no idea what to expect, and were greeted by representatives of the university with incredible hospitality. On the opening day of the conference, we were recognized as distinguished guests, sitting alongside the chancellor of the university on stage. I’m not sure how qualified we were to receive this distinction; I’m pretty sure it was only because we are Americans. After the introduction ceremony, we were the first presentation. You couldn’t tell that none of us had delivered a speech to that large of a group before; we spoke with poise and assurance, and the crowd was very engaged in our presentation. After our speech, the room broke for a chai break, and we breathed a collective sigh of relief that our presentation was over and our brains could rest.

The rest of the conference was spent listening to research abstracts, getting a tour of the on-campus hospital, meeting other speakers (most notably, a representative of the Ministry of Health of Oman), and being in the audience for the ‘cultural show’, of which the most memorable acts were the hilarious woman who was MC for the night (where do you think I got “bang on” from??), and a group of hip-hop-dancing clowns.

January is a super busy time of the year for CRHP (hence why I wasn’t able to write until now)! We had three student groups come – Calvin College, Nossal Institute in Melbourne, and Elon! One of my favorite things about CRHP is the opportunity to meet so many different people – different countries, professional backgrounds, passions, and perspectives – and January has been a whirlwind of all of these. Amid the chaos of coordinating village visits and scheduling were many walks to the lake, welcome & goodbye dinners-turned dance parties, fireworks shows and snake nights. The Elon group especially was a much-appreciated small dose of home.

Sankrant is one of the only Hindu festival that is especially for women. The celebration is to pray or give thanks a healthy and loving husband, as well as to resolve disputes and start fresh. To celebrate, all the girls got dressed in saris and headed to town to join the rest of the village women at the temple… which had turned into a madhouse! As women pushed their way to the main shrine, they traded multi-colored halwa (sugar granules coated in sugar syrup), seeds, and nuts from trays they carried, exchanging the tokens of goodwill with a phrase meaning ‘Accept these sweets and speak sweet words’. By the end of the afternoon, our foreheads were covered in red and orange turmeric powder.

me and my main squeezes 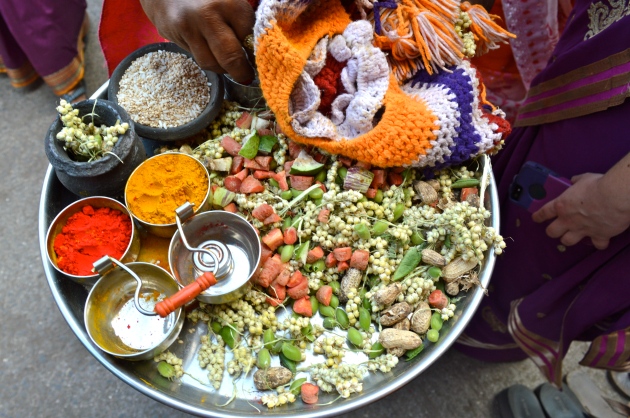 trays of sweets, nuts, vegetables and powders the women at Sankrat carried

Elon chickadees before the festival!

Going to Pune with Elon

Before the Elon students returned to the US, they had a scheduled pit stop in Pune to meet with STAPI, the Sosva Training and Promotion Institute, to learn about urban health and how it compares to what they had learned the past three weeks in rural Jamkhed. I decided to tag along, eager to create some balance to my knowledge about urban and rural health in India, to get off campus for a bit, and to spend some more time with the Elon girls, who were a feeling of home. STAPI arranged for an excellent array of speakers on the first day, including a woman who spoke about female feticide and sex-selective abortion, the policies that the Indian government has in place to deter these tragedies from occurring, and the existing social barriers that prevent these policies from being truly effective.

Most eye opening was our visit to an urban slum, which reminded me of a dirty, trash-ridden touch-tunnel. As a representative from STAPI led us through the slum, women and children poked their heads out from behind curtain doors. Smoke from small fires for cooking and heating water for washing, combined with the occasional whiff of urine and feces, was mildly suffocating. I asked our guide where a toilet was, and the slum woman she asked didn’t know. We weaved in and out of a maze of tin-slat huts that all leaned on each other and connected, ducking under clotheslines and ladders, and turning our bodies to fit through small spaces. Somehow we made our way up, and emerged on a railway track that was absolutely crowded with young children, men, and women.

over a week later, all of my senses are still digesting this experience

New kids on the block

In addition to welcoming 2014, we also welcome new interns and a new doctor! Three new interns – Margaret from North Carolina, Sarita from Texas, and Lindsey from Virginia – have joined the crew and have already begun working on the Adolescent Girls Program, Helping Hands shop and social media. There are a total of 9 international fellows & interns on campus now – a group big enough to take on the Australian students in a cricket match, with the help of Vishnu, Ganesh and Ohm.

So far, so good, 2014! February promises to be wonderful thanks to another special guest – JP comes to visit in LESS THAN A WEEK!